After a couple of days in La Paz re-enacting scenes from the movie Scarface, I managed to pull myself away from the edge of the abyss and headed south to Tupiza. The main thing to do in TupÃ¬za is book a trip to the salt pans. I had a day or two to kill before my trip so went Â´wild westÂ´ style horseriding. I was with a German lady called Eve. Boy, could she talk. Too much, too fast and too boring! The trip started at 3pm and after 4hrs of listening I looked at my watch and it was only 3.15.

Thankfully the four day trip to Salar de Uyuni was better. Much better. It was the highlight of my travels so far. Machu Pichu is probably the best man-made thing I have ever seen but nothing man-made can ever compete with nature. This trip beats it by a very long way. Its up there as maybe the best place I have ever been. Perhaps even ahead of Namibia. But behind Vegas, naturally.

I was so relaxed there and dont think I have ever felt more free. It made me realise just how much clutter and noise there normally is and that its a release to go somewhere where there is just nothing. Rather than prescribing tranquilisers, docs should send people to deserts. Works a treat!

In fact, the only issue I had with the trip was the same 4 bloody songs that the driver kept playing. Over and over. After 2 days we were all sick of it, but thankfully we worked out that my ancient ipod shuffle could be plugged into the car stereo. So we were rescued by Snow Patrol, Keane, Chilli Peppers and, er, S Club 7..

As its out of season here and there are so few travellers I keep bumping into the same people. On the last night of the trip I saw the canadians that I had travelled with as well as three girls from new years eve. So we all stayed up playing cards and drinking rum till 2.30am. Which is a bit early I know and we would have stayed up longer, but we had to be up at 4am for the drive into the salt pans to see the sunrise and to take these pics: 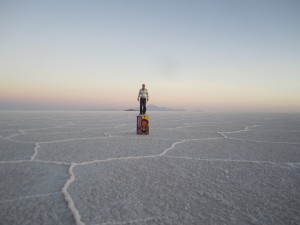 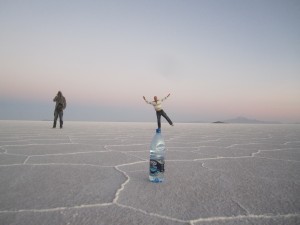 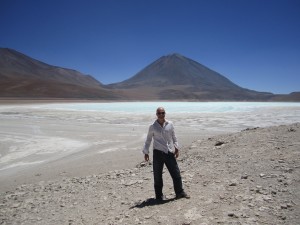 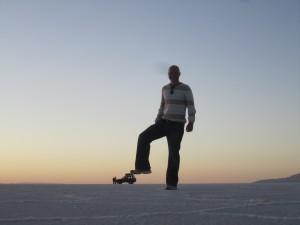 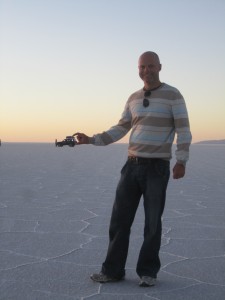 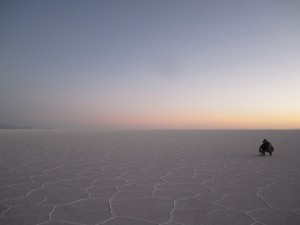 Back in Tupiza now and will head into Argentina soon.

2 Responses to Tupiza to Uyuni